Can a dual-cab ute be considered a family car? Yes, it can and the driver’s pride will still be in good shape.

A dual-cab ute family car seems like an oxymoron I hear you say. Until recently we would agree. The light commercial market or ‘tradie ute’ market would never have been an option for a buyer looking for a truck for work but a family car on the weekend. That was until 2011 when Ford launched their new model Ranger that changed how buyers perceived the dual-cab ute in the market. We review our two most requested dual-cab ute family car options; the 2017 Ford Ranger XLT and the 2017 Toyota Hilux SR5. 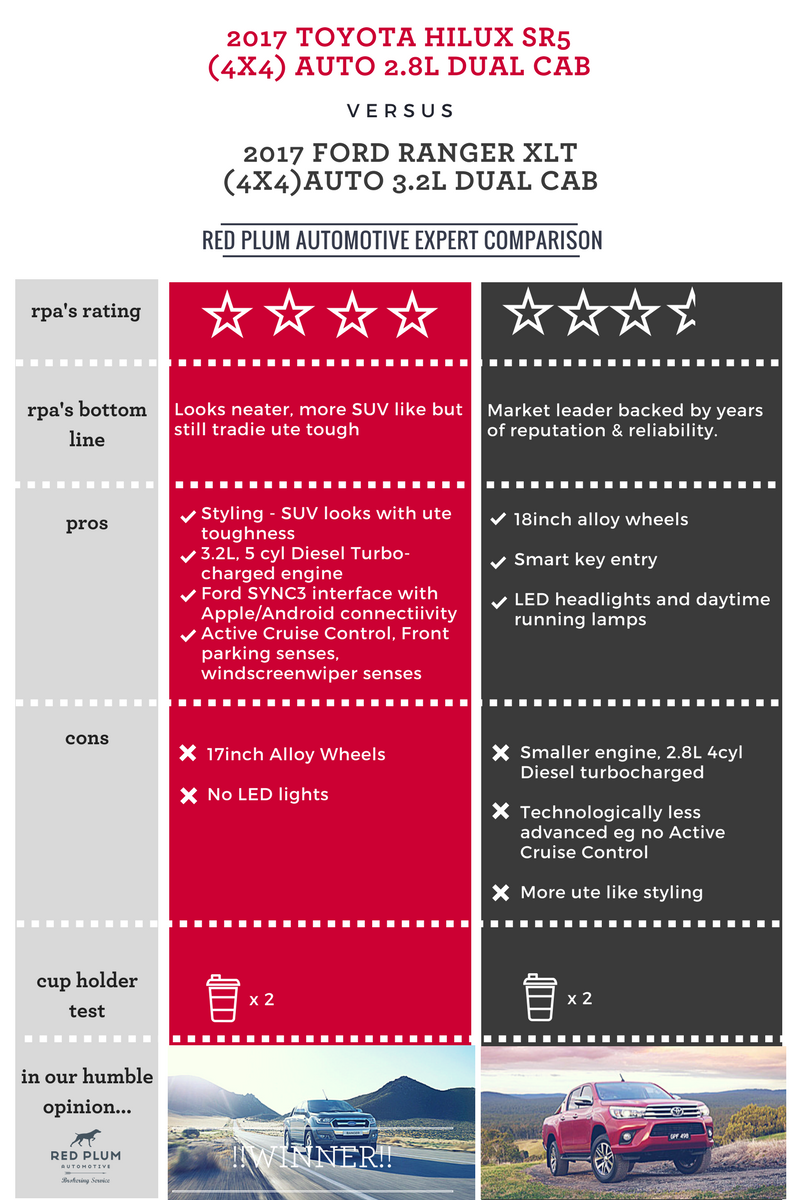 Toyota Hilux has been the benchmark for anyone in the market for a serious tradie ute that is not only tough but is reliable, can carry and pull as much load as you need and looks the part.  That was until 2011 when Ford Ranger changed how buyers perceived the dual-cab ute and moved the tradie ute up a notch or two and drivers found a new weekend family car! To Toyota’s credit, they made some changes and they still hold the top sales spot in Australia each month, however, Ford Ranger keeps nipping at their heels particularly in the dual-cab family car market.

There is no mistaking you are driving a Toyota Hilux but the SR5 looks way sharper than the workmate and SR models. Toyota has added plenty of chrome to help you stand out, including front grille, door handles, rear bumper and chrome sports bar. Add 18inch alloys, smoothed sides ( no external tie-downs )  and LED headlights and daytime running lamps and this dual-cab ute family car would feel at home on a work site or pick up at a school sporting competition.

Safety is something you expect from Toyota and ANCAP agrees awarding a 5-star rating which is the maximum rating, notable features;

Powered by a 2.8litre four-cylinder turbocharged diesel engine. A good solid engine that has powered many Toyotas in the range successfully but is our performed by the Ranger here.

The interior is nice, clean simple lines, well finished, dials and instruments are also easy to use and are in the right place. The infotainment unit is there but it’s not great, hard to use the touchscreen when travelling and just looks awkward. Overall the interior isn’t as up-to-date is our view.

The drive is comfortable remembering this is a 4×4 but not as industrial as the past. Back seat passengers will not have the same level of comfort as a passenger car particularly when there is no load in the tray.

The Ford Ranger really was the disrupter in the dual-cab ute family car market. What Ford did was it turned the ute into more of an SUV, one that drove like a car without losing the tough rugged reputation a ute has always stood for in Australia.

It doesn’t matter which way you look at this rig it ticks all the boxes when it comes to style it looks tough and has just the right amount of aggressive stance to not be overbearing. Ford have put chrome in all the right places, we particularly like the grille. It could be argued 18inch alloys would have added to the good looks but it could also be argued as a 4- wheel drive the 17 inch are the better wheel. It also comes with plenty of new technology.

An ANCAP 5 star rating has been awarded but has a few more up-to-date safety features, notable features;

This is car-like driving, even the steering is lighter than you would expect. The 3.2 Litre turbo diesel five-cylinder is a really smooth engine, particularly when coupled with the 6-speed automatic transmission. This engine gives you quick comfortable over-taking, easier highway driving, easy towing, a very user-friendly car-like drive.

This is the dual-cab ute family car with luxury car features. A well-trimmed quality interior that feels contemporary, comfortable and well designed.  The back seat ride is as you would expect for a dual-cab particularly with no load on board and certainly not as much leg room or comfort as a 4×4 waggon

With the introduction in 2011 by Ford of their updated Ranger, the dual-cab ute family car became a reality. The result is this class of vehicle is just getting better and better. What was once the domain of the tradie is now considered as having dual uses…real work during the week as the hard working ute, family warrior on the weekend…best of both worlds.

This new generation is more SUV-like but still, a truck so does the job it was designed to do. Utes aren’t utes anymore they are people movers. Improvements to safety standards haves had a significant impact on the market’s perception. The ute can now be used safely as a family car. A great option for business owners who get the legitimate benefits of being a work vehicle and the bonus of a 4×4 large comfortable vehicle on the weekend.

Our professional assessment and in our humble opinion there are a few key features that set the 2017 Ford Ranger XLT ahead of the 2017 Toyota Kluger SR5;

We receive a high demand for both these vehicles and it is about a 50/50 split on numbers that we sell. Sometimes it just comes down to personal brand preference and your driving style.

If you have been thinking your next car should be a dual-cab ute family car we would love to chat and share our knowledge and understanding of this type of vehicle.

We love to chat, so please give us a call to speak with one of the team.

If it's after hours, that's ok.

Looking for more information? Leave your details and one of the Red Plum Automotive Team will call you back to begin the Red Plum Experience.

Stay up to date with our latest news and products.

Your email is safe with us, we don't spam.